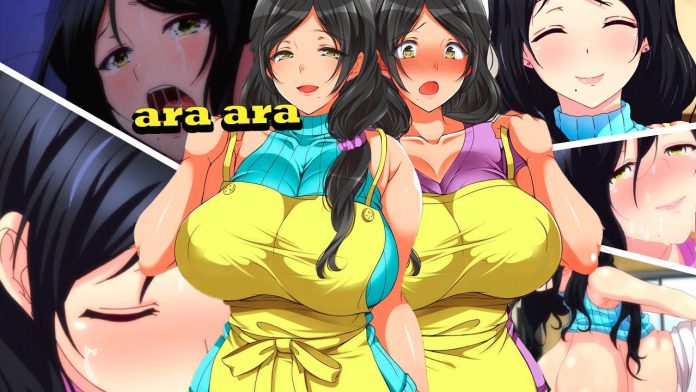 The story starts with Kazuhiko whose father brings a gorgeous stepmom to his house but he can’t seem to accept her as a mother at all. A year has been passed by yet Kazuhiko never considered as a mother but she thought things will somehow get better soon. But she receives some strange calls from a stalker and even receives sex toys when she’s alone at home.

Shinji mostly known as Shin-chan works as a laundryman for Asai Cleaning Service which is run by a young widow who is also drop-dead gorgeous. While his job is to collect the laundry from various housewives and clean it well, he also doesn’t waste a chance to mess around with them.

Especially he never misses a day to have sex with Marissa, a hot chick from Bangkok. Eventually, he finds new women in every house he goes for laundry and finds pleasing them all the time. Could his life be any more lucky? I mean, he gets to bang all the gorgeous milfs in his neighborhood.

The Kagami family is rather popular in the entertainment industry and they always perform well in the modeling and fashion designing fields. Sayoko is the mother of three gorgeous girls named Miu, Fubuki, and Haruka. These three were given an excellent opportunity to work in TV production.

They all travel to a village that looks quite isolated and without even knowing what’s going on around them, they become unwilling participants in a secret ritual. Will their family escape from there or become the slaves and submit to the lust of the villagers? I guess you’ll find out soon enough.

Kitazawa Yukie is your typical housewife who leads her life normally but one day, she happens to cross paths with a wealthy and spoiled kid named Nogawa Taketo. Apparently, Taketo has been wanting to have a sex slave for himself for years as his father does with his secretary.

After this accident, he tricks Yukie into signing the contract where she has to settle for the damages with her sexy body. Being helpless, she begins to serve Taketo as a sex slave and soon his game begins as his father makes a move on the daughters of Yukie. Could this lead to any big misfortune?

Shuu and Haruka have been the perfect couple for years and they finally got married and just like that, two years have passed by. When they decided to give it a try for a child, a minute (not actually) problem has occurred. Although it seemed like a quite normal one in the beginning, soon they found it is not.

The thing is that Shuu’s problem is not getting his penis aroused and that’s not a defect of impotence instead he only gets aroused if his wife cheats on someone else. You heard it right. Then how will he ever be able to enjoy sex with her wife and raise their dream child?

Kyounyuu Hitozuma Onna Kyoushi Saimin follows the story of Morishita Wataru who happens to find a strange which comes from a hypnosis app on his mobile. It lets him control any person he can but he is picky though.

Since he got such kind of strange app, what do you think he will do? Well, he will target extremely hot and sexy women who can take any type of sex and please him with all they have got. Yes, this hero targets gorgeous and busty teachers since most of them are milfs.

It is not a spoken fact but women who are in the ages of their 30s definitely need extreme care when it comes to sex. They can’t control their sexual urges no matter what and that’s exactly why most cheating on their partners are done by this age of people who we call milfs.

The story takes place in a normal and happy household where Youko, her son Kazushi, and her successful husband leave peaceful lives. Even though their lives seem pretty normal, Youko’s husband is rather busy with his work and doesn’t care about her sexual urges at all.

Ano Danchi no Tsuma-tachwa The Animation

Ano Danchi no Tsuma-tachwa The Animation follows the story of older women who don’t get satisfied by their husbands and takes place in an apartment. Mitsuru Takei is a young wife and can’t seem to get satisfied with her old husband who can’t even make her scream at least once.

On the other hand, you have Asahina who is a young mother with a stunning body and offers everything for sex. As customers keep coming to the apartment complex, they happen to stumble upon someone else’s wife to clear their sexual urges. This becomes a routine and it’s a win-win situation for both parties.

Miyuki is a good mother and she strives her best to be the best mother she can be for her son Yutaka and also cares very much for him. But when she meets his friend Masato, everything goes away as he makes a move on her and catches her off guard.

He claims her as his own and begins to violate her in every place possible like in the kitchen, bathroom, and even in the bedroom while her son is asleep. One day, she is forced to have bondage sex and when her blindfolds are removed, she sees her son Yutaka on the giving end.

Mitsuko is a gorgeous woman who married the person she loved and moved to her husband’s house. There she began to live a happy life but something’s odd with their family.

Why does everyone make a move on her? Especially the males in the house seem to have a sexual eye on her and she can’t help but submit to them. What will happen to her from now on?

Even though she seems to not enjoy it in the beginning, soon she gives herself into pleasure and accepts every male in the family. Is she enjoying sex with them and having the best time of her life? Or is she living a regretful life by cheating on her husband?

Boku to Sensei to Tomodachi no Mama

The Takashiro family was quite honorable in the past but it is no more as their family has gone bankrupt and even have a few debts. Nanako is the family’s only daughter who spends her days normally controlling her lustful thoughts on Yujiro, who she likes a lot.

But what she doesn’t know is that a rival family set their sights on Nanako since they owe them a huge debt. Not just Nanako but her busty and gorgeous mother is also getting into action to clear the family’s debts. Now, these two women have to display eroticism for these sex maniacs who will not satisfied until they break their vaginas.

Yuuto has been living alone in an apartment but he never felt as lonely thanks to his neighbors Mako, Anna, and Megumi. They give him a good company but always treat him as a child which he doesn’t like.

On his birthday night, they give him a surprise by saying that they will do something special for him since it is his birthday. Seems like Yuuto’s summer will be even hotter with these busty beauties.

Okusama wa Moto Yariman is a certainly fappable material and the story is quite simple and I think these things also happen in real life somewhere in the world. It has a great animation and stunning artwork to keep you entertained.